Did you know that bad photographs are the most common reason for the rejection of passport applications?  Get your photos done right the first time.  We guarantee if you supply us with a good photo we will size and print your photo correct the first time.  If we have a problem with the photo you supplied us we will contact you via email and ask for a new photo, so you have nothing to lose.

We have been specializing in Canadian passport photos since 1989.  We will print your passport photos with the precise measurements needed and print them on the correct paper to guarantee their acceptance. Most Passport photo requirements are different for each country and some are very hard to make correctly to pass the strict passport photo requirement rules.  Let us do it right the first time so you don’t have to go through the Disappointment of a returned Canadian passport application due to poor photos.  With our long time knowledge and attention to detail we GUARANTEE their acceptance or we will do it again for free. You can upload your photos to us online here ORDER NOW►.

This is a non-government site and whilst every effort is made to ensure the information is correct and up to date, there may be changes which we are not aware of.  You should confirm details or any concerns with a Canadian Consulate or Embassy Office.

If you have or know of newer information about Canadian Passport, Visa, Citizenship, Permanent Residents or ID photo requirements that is different than the specifications you see on this page, please let us know and we will review and include your helpful information in our next updated of this page.  ​Click here to send us updated information►

02/26/2020
I didn't want to comment until I received my passport. No issues. Great service here. Done right the first time. Great price. Super fast shipping. Highly recommended. Will use again!

02/17/2020
I was really skeptical about using this service - it can't be THIS easy! Sure enough, took a pic of my son against the background of a white cupboard. It was okay, there was some shadowing. Received the passport-ready pics back in lightning speed, absolutely perfect!! I'm so grateful. What a HUGE relief.

02/07/2020
I received very fast service on my photo order. The photos I received met Canada Passport requirements and were accepted first time without issues. I will definitely use ''Passport Photo Now'' again and would highly recommend this service! Thank-you Bruce for making it easy!!

10/22/2019
I got photos for Canada passport renewal in 2014 and again in 2019. The photos were accepted no problem both times. Bruce was helpful and communicative. I will use again if I need another ID photo to Canadian specs.

09/03/2019
After having a previous passport photo rejected by the passport office in Canada, and going to EVERY photo-processing place around (including Costco, Walgreens, Wal-Mart, Rite-Aid and contacting local "professional photographers"), I was at wit's end. Somehow Canada has stopped the U.S. box stores from producing passport photos for Canada, and the story just gets worse from there. Finally had AAA do it. DON'T do that. Bad. The fix: Bruce and team here helped advise me on taking a better shot myself, and did the finishing touches to meet the over-anal specs for Canada passports.. . and passport app went thru with with the new photos. Thanks!!!

07/15/2019
Highly recommend ! 5 stars. Not only is it fast service but it's the upmost professional work, with excellent communication when there's issues so your picture perfect. I've used them twice now, both times fabulous job for a renewal of a Canada passport which can be a difficult process living in the USA due to the different requirements.

04/17/2019
Great service - shipped much quicker than expected at a good price. Photos were exact

12/19/2018
Nice service. They do exactly as they say, are helpful along the way and they get the photos to you quickly. Will use them again as needed.

11/16/2018
What an easy process! I needed a passport photo for my wife's Canadian passport. They are known to be very particular on the photos submitted which have different requirements from US passports. Most passport photo providers can only take US photos. So, I set up a white photo backdrop and took pictures of my wife with my Canon 50D digital SLR camera and sent the selected digital image to PassportPhotoNow.com. That was yesterday. Today I received the photos in the mail (I am local in Orange County, CA). They look great and I'm sure they will be accepted by the Canadian authorities. This is a great service, fast and reasonably priced.

06/24/2018
Service is the very best and makes it easy to get your Canadian passport photos here in the United States, not always easily done. Passport photo now makes it simple. I completely recommend it

05/25/2018
I have been waiting for my results to see if my pictures were good enough to be accepted for my renewed passport. My picture was good and I received my passport. Definitely would say I'm happy with this order and recommend it to all needing a legit passport photo. 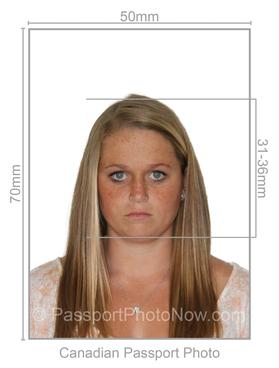 2 photo are needed for

Canadian passport photos can be made from a picture you take with your camera by using our online service or with our mobile passport photo service. We will print them too the exact specification that your government will accept. 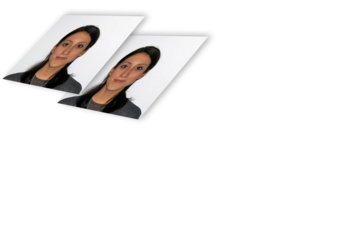 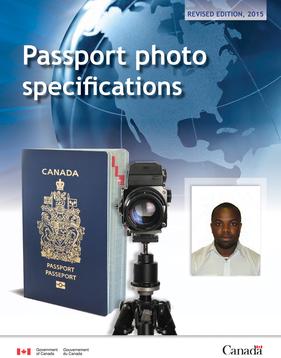 lying down from above.  Hands, arms, etc. used to support the child should not be visible.