Did you know that bad photographs are the most common reason for the rejection of passport applications?  Get your photos done right the first time.  We guarantee if you supply us with a good photo we will size and print your photo correct the first time.  If we have a problem with the photo you supplied us we will contact you via email and ask for a new photo, so you have nothing to lose.

We have been specializing in Irish passport photos since 1989.  We will print your passport photos with the precise measurements needed and print them on the correct paper to guarantee their acceptance. Most Passport photo requirements are different for each country and some are very hard to make correctly to pass the strict passport photo requirement rules.  Let us do it right the first time so you don’t have to go through the Disappointment of a returned Irish passport application due to poor photos.  With our long time knowledge and attention to detail we GUARANTEE their acceptance or we will do it again for free. You can upload your photos to us online here ORDER NOW►.

This is a non-government site and whilst every effort is made to ensure the information is correct and up to date, there may be changes which we are not aware of.  You should confirm details or any concerns with a Irish Consulate or Embassy Office.

If you have or know of newer information about Ireland Passport, Visa, Citizenship or ID photo requirements that is different than the specifications you see on this page, please let us know and we will review and include your helpful information in our next updated of this page.

lying down from above.  Hands, arms, etc. used to support the child should not be visible. 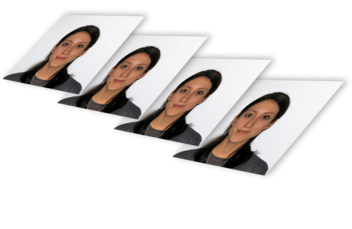 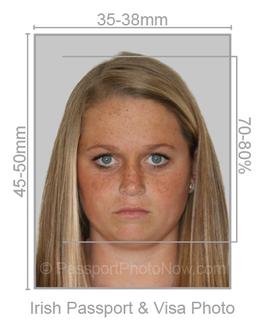 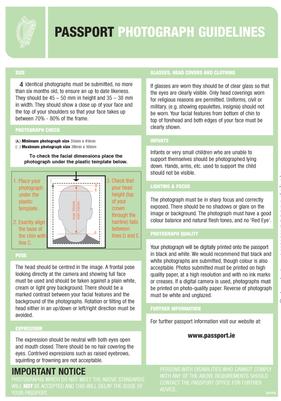 4 photo are needed for

09/20/2019
So convenient to get photos printed by Passport Photo Now. He's knowledgeable on requirements and the photos (electronic and print) came out great. Highly recommend!!

05/10/2019
I worked to get Citizen Photos for a large group of people applying for Foreign Born Registration in Ireland. Bruce was very helpful in helping me learn how to take a passport photo that would be accepted. Thanks!!

05/12/2018
Photo requirements for an Irish passport are strict and differ from those in the USA. What a relief it was to find this online service. I had difficulty downloading my photo to the site, so I emailed Bruce and received a response the same day. I followed his suggestion and sent it off. Six days later, my photos arrived. So easy and inexpensive.

04/09/2018
Although I await the approval of my photos by the Irish Embassy, the speed and efficiency of getting the photos from Passport Photo Now was EXCELLENT!

12/19/2017
Service was outstanding, Bruce was quick to answer emails and the photos were delivered as promised the next day, I highly recommend Passportphoto Now

10/28/2017
Bruce was so helpful. He emailed me a couple time until I sent in a photo that would work. So glad I used this service and my passport was accepted with no issues at all. Will use for passport renewals! Thanks again!

08/08/2017
Used this service for photos to accompany my request for inclusion on the Registry of Foreign Births, and then for a passport. Turnaround was terrific, and photos were accepted in both instances without a hitch.

02/23/2016
Bruce was extremely helpful and this service is great! I live in a city that does not have a place to get passport photos for countries other than the US, so this made it super simple and worked perfectly. I had issues knowing how to send the file online properly so Bruce gave me personal help via email and held my hand through the process until I got it right. And my picture was accepted from the Irish consulate without a problem (and I have heard stories about people's passport applications getting rejected because their picture was not perfect and they have to resubmit which is a long process). Bruce got it right the first time which saved me a lot of time and hassle.

06/04/2015
I received my new Irish passport recently. Bruce was great with advice on how to take the photo correctly (iphone and ipad's do not work) and advice on lighting etc.. The feedback on photos I sent was prompt. Once we got it right the photos were ready and shipped quickly. My photos were accepted first time which would not have happened if I had not found this web page. I will be recommending Passportnow to all my friends who apply for passports no matter which country they apply to.

Irish passport, visa, citizenship & ID photos can be made from a picture you take with your camera by using our online service or with our mobile passport photo service. We will print them too the exact specification that your government will accept.